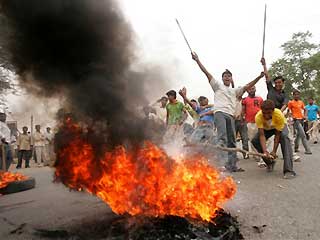 India witnessed 703 communal riots during the calendar year 2016 in which 86 persons lost their lives and 2321 people injured compared to 752 communal incidents in 2015, 644 communal strife in 2014, 694 in 2013 and 668 in 2012. According to the Union Ministry of Home Affairs (MHA), one major communal riots occurred in Hazinagar, West Bengal during the year. An analysis of communal riots, however, reveals low intensity violence is the new mantra of the anti-social communal elements.
MHA says that activities of religious fundamentalist organizations or groups, having a bearing on peace, communal harmony and security of the country continued to be under constant watch of law enforcement agencies and suitable action taken, wherever necessary, under the Unlawful Activities (Prevention) Act, 1967. The over all communal situation was, by and large, under control, the MHA maintained.
As for major communal conflagration over Ram Janma Bhoomi-Babari Masjid issue, the MHA says that the Centre being the custodian of acquired land at Ayodhya and as directed by the Supreme Court of India, the Union Government has been maintaining status quo on the disputed land in coordination with the State Government of Uttar Pradesh and the Authorized Person-cum-Commissioner, Faizabad Division, Faizabad.
Meanwhile, National Foundation for Communal Harmony (NFCH) under the MHA continued, as in the past, to promote communal harmony and strengthening of national integration, besides providing assistance to the children and youth rendered destitute and orphaned in communal, caste, ethnic or terrorist violence during the year. It released assistance of Rs.231.69 lakh to 1,684 victim children of communal carnage, caste, ethnic and terrorist violence in 2016.
National Communal Harmony Awards, instituted by the NFCH annually in two categories, individual and institutional, carries a certificate and Rs. 5 lakh for individuals and Rs.10 lakh and a certificate for organizations, selected by a jury under the Chairmanship of Vice-President of India, for outstanding contribution for promoting communal harmony and national integration. The awards are conferred in a ceremony at New Delhi. The Foundation has already invited nominations for 2016, which are under process.
In furtherance of its mission, the NFCH undertook Extension Activities, such as, Reach, Interfaith-Interaction, Partnership and Cause-Partnership, either independently or in association with States and Union Territories, on a large scale during 2016. The Foundation, also collaborated with Navodaya Vidyalaya Samiti and held a large scale essay, story writing and painting competitions amongst children of 588 Jawahar Navodaya Vidyalays from August 31 to September 20, 2016 at school, cluster, regional and national level on communal harmony and national integration. A sum of Rs. 5, 58,000 was sanctioned for winners of these competitions at different levels. The Foundation also organized a programme, WE ARE ALL ONE focused on school children on November 24, 2016 at National Police Memorial, Chanakyapuri, New Delhi.
All Union Ministries, State Governments and Union Territory Administrations were also instructed to observe Rashtrya Ekta Diwas and Rashtrya Sankalp Diwas on October 31, 2016 and Qaumi Ekta Week during November 19-25, 2016.
It’s to be noted that the America based Pew Research Centre, in its latest publication of April 2017, ranks India as the worst placed amongst 198 countries in religious freedom both in Government Restriction Index (GRI) and the Social Hostilities Index (SHI). India fares poorly on both counts. Score is abysmal on SHI at 8.7 out of 10.10 being the worst. India is bracketed with Syria, Nigeria and Iraq. Social hostilities comprise crimes/violence motivated by religious hatred/bias, use of force to dominate public life with particular perspective on religion, preventing religious groups from operating, harassment of women for violating religious dress code and so on. The detailed reports can be accessed on pewrsr.ch/2pkqsZq and pewrsr.ch/20IJQvt.
Of late, India’s time tested civilisational strength of tolerance, unity in diversity and oneness of people and oneness of nation, is under strain. It’s time the Union and State Governments joined hands together to enforce the rule of law based democratic system of governance to uphold, protect and defend the Constitution!