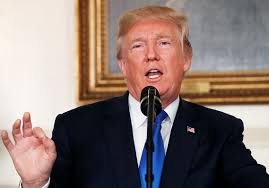 And experts in the region add Trump ordered the U.S. war forces to drone-bomb Suleimani without, as usual, thinking through the consequences. That led Biden to comment Trump “just launched a stick of dynamite into a tinderbox.” The announcement on Friday that Trump was ordering 3,000 more U.S. troops to the Middle East in the wake of the killing only escalated the war danger even further.

Pushed by CNN questioner John Berman, Trump Secretary of State Mike Pompeo on Friday defended the killing while admitting Suleimani presented no immediate threat to the U.S. “Any imminent threat to the U.S. homeland?” Berman asked. “These were threats that were located in the region,” Pompeo replied.

Suleimani’s killing does present the threat of war, Democratic lawmakers said. But one Facebook responder to the Democrats pointed out that they—like the GOP—voted last month to pass the annual war budget bill after anti-Iran war provisions were stripped out of it. Sanders made that point, too.

A spot check of websites of major unions—the Machinists, both teachers unions, the Communications Workers, and the Service Employees—produced no immediate comments on the drone strike yet from organized labor.

U.S. Labor Against the War, an alliance of anti-war trade unionists, tweeted late Thursday night: “The U.S. elite want to lead us into yet another reckless war. The aggression on Iran will only profit handsomely for U.S. billionaires and the Pentagon. Workers everywhere will pay the consequences. Get involved. Fight back. #HandsOffIran.”

“Trump’s dangerous escalation brings us closer to another disastrous war in the Middle East that could cost countless lives and trillions more dollars,” Sanders said in the first of two tweets targeting the president as news of the killing became public. “Trump promised to end endless wars, but this action puts us on the path to another one.”

Sanders and the House sponsor of the ban on the war with Iran, Rep. Ro Khanna, D-Calif., chided colleagues for giving Trump “a blank check” by deleting the ban from the December military measure.

“Any member who voted for the National Defense Authorization Act—a blank check—can’t now express dismay that Trump may have launched another war in the Middle East,” Khanna and Sanders said. “Our Congress let our nation down again by failing to stand up against a war in Iran.”

Biden dismissed the Trump administration’s explanation for why it ordered the killing. “The Administration’s statement says that its goal is to deter future attacks by Iran,” the former vice president said, “but this action almost certainly will have the opposite effect…. I’m not privy to the intelligence and much remains unknown, but Iran will surely respond. We could be on the brink of a major conflict across the Middle East.”

“Suleimani was a murderer, responsible for the deaths of thousands, including hundreds of Americans,” Warren said on Facebook. “But this reckless move escalates the situation with Iran and increases the likelihood of more deaths and new Middle East conflict. Our priority must be to avoid another costly war.”

Several of the other Democratic candidates for president were rather less forceful in expressing their thoughts on the Trump-ordered assassination.

“As we learn more in the coming days and weeks, one thing is clear,” former South Bend, Ind., Mayor Pete Buttigieg, a Middle East war vet, said. “This must not be the start of another endless war. We must act wisely and deliberately, not capriciously or through Twitter.”

Sen. Cory Booker, D-N.J., said the president shouldn’t have acted “on impulse,” but did not condemn the action. Instead, he said, such an assassination “should be done in a larger strategic vision and understanding what the consequences could be.”

House Speaker Nancy Pelosi, D-Calif., took the same line as Warren, but more mildly. Lawmakers will undoubtedly have much more to say about the drone strike and its consequences when they return to the U.S. Capitol on Jan. 7.

“American leaders’ highest priority is to protect American lives and interests,” Pelosi’s statement said. “But we cannot put the lives of American service members, diplomats, and others further at risk by engaging in provocative and disproportionate actions. Tonight’s airstrike risks provoking further dangerous escalation of violence.”

Pelosi also said Trump didn’t even bother to tell Congress. While she did not say so, the War Powers Act and laws covering U.S. intelligence agency operations require such advance notice to selected top congressional leaders.

Sen. Tom Udall, D-N.M., who, with Sanders, pushed to keep the Iraq war ban in the military money bill, said Trump’s drone strike brings the nation “to the brink of an illegal war with Iran.”

“Such a reckless escalation of hostilities is likely a violation of Congress’s war-making authority—as well as our basing agreement with Iraq—putting U.S. forces and citizens in danger,” Udall said in a statement, “and very possibly sinking us into another disastrous war in the Middle East that the American people are not asking for and do not support.”