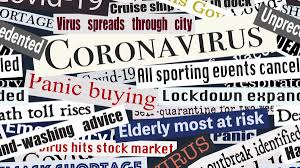 RIGHTWING AGENDA CHALLENGES SEVERITY OF COVID-19
When is science not actually scientific? One answer is that research which cherry-picks and manipulates facts to support a preconceived hypothesis is not truly scientific.

Long after Galileo and Copernicus demolished the Ptolemaic theory, some highly educated scientists kept creating astronomical models showing that the sun, planets, and stars revolve around Earth. The sheer weight of evidence finally put an end to such exercises, and even the Catholic Church was at last compelled to admit that Galileo was right.

In our times, a few scientists with university degrees and published academic papers still claim that human-based carbon emissions are only a minor factor in climate change. Big Oil rewards such hired guns, who give plausible cover to say that “scientists are in disagreement.” This is a lie, since the scientific community has overwhelmingly concluded that fossil fuels are a key driver of global warming.

A similar situation has emerged around the COVID-19 pandemic. Medical researchers and epidemiologists are almost unanimous in their support of physical distancing and other strategies to slow the spread of the virus and gain time for more effective treatments and the development of a vaccine. But many corporate forces and right-wing leaders like Donald Trump want a “herd immunity” strategy—accepting a higher number of immediate deaths in exchange for a faster return to economic expansion.

The herd immunity concept is a favorite theme of the recent “open up the economy” rallies, but this theory is based largely on guesswork since COVID-19 is proving to be a very unpredictable virus.

These forces also rely on data manipulation to inflame the deep fears the pandemic has created among people facing mass layoffs, small business shutdowns, school closures, and other serious challenges. Nobody should arrogantly dismiss these fears as a desire to get a haircut or a mani-pedi. Working people have been slammed with the most serious economic crisis in nearly a century, and they have every right to want a return to “normal.” But as the mayor of Atlanta eloquently insists in the face of a badly bungled reopening of the state of Georgia, you have to survive to fight another day.

In this confusing situation, far-right extremists are promoting the claims of scientists who are said to be presenting “the real truth.”

One of these is Knut Wittkowski, former head of the Department of Biostatistics, Epidemiology, and Research Design at Rockefeller University. Wittkowski argues that the virus could be “exterminated” if most people were allowed to lead normal lives while the more vulnerable in society were somehow protected.

Wittkowski writes, “If you flatten the curve, you also prolong (it)…. And I don’t see a good reason for a respiratory disease to stay in the population longer than necessary.”

Critics respond that “flattening the curve” does indeed allow the virus to stay in circulation longer, which is certainly not ideal. But the benefit is that the necessary resources are then available to treat all serious cases properly, dramatically reducing the overall fatality rate.

Interestingly, Wittkowski claims that “there is no shortage of PPE equipment” since, somewhere in the world, there exists PPE equipment that is not currently being used. Therefore, any local “shortage” is just a misallocation—perhaps in the same way that a drought is simply a misallocation of water that is currently in the ocean.

Any reader can use Google to fact-check Wittkowski. But for the political far right, the argument is simple: Don’t trust all those medical experts, trust this one guy who says what we like to hear. Another case in point is the argument promoted by Trump that COVID-19 is much more widespread than thought, and no more dangerous than the flu.

Various internet sites have reported on a study out of Stanford University, which concludes that the COVID-19 infection rate is much higher among California residents than previously believed, and far less lethal. Back in March, the study’s authors wrote an editorial in The Wall Street Journal arguing against quarantine strategies, which impose high economic and social costs. Critics, including many statisticians and epidemiologists, say that their poorly-constructed study simply confirmed their own political biases.

For their study, the authors relied on self-selected volunteers, disproportionately white and female, and very different from the overall demographics of Santa Clara county. Perhaps more serious, the study used a testing kit from Minneapolis-based Premier Biotech, with known performance discrepancies including a high “false positive” rate that can skew results, especially with a small sample size.

Statisticians and medical experts are demanding that the Stanford study’s authors apologize for their errors. Unfortunately, this study has been widely circulated on social media, not because it provides any truth, but because it backs up a far-right agenda.

The moral is, beware of right-wing forces using highly selective sources. They don’t care about you, only about a quick return to profits as usual.