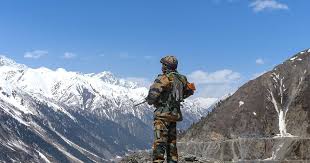 INDIA HAS TO FRAME ITS GEO-POLITICAL STRATEGY WITH GREAT CARE
Lockdown being gradually lifted across the globe does not signify that the fears of corona virus are over. Yet great powers have become active in asserting to play their role in a post-COVID world. Concerns for collectively working to save the world from COVID crisis have taken a backseat. With US presidential elections round the corner, this year, President Trump is determined to expose China for not being transparent in handling the pandemic which has spread across the globe from its epicentre. China has kept on denying that the virus was not the product of Wuhan lab, but has jumped to humans from the wild.

With a view to keep off China, President Donald Trump has proposed to invite India, Russia, Australia and South Korea to G-7 Summit to be held in September. G-7 is a grouping seven leading economies that include US, United Kingdom, France, Germany, Italy, Japan and Canada. He has said that G-7 has become “outdated” and needs to be expanded. This move has irked China which has accused New Delhi of coming closer to US. Another thing China is not pleased with India being elected as chair of WHO Executive Board. Also New Delhi being proposed to represent Asia-Pacific as a non-permanent member of UN Security Council is not being viewed well by either China or Pakistan.

Beijing wants that India as the chair of WHO Executive Board not to side with the US lobby which is trying to expose China as responsible for the COVID crisis. China has so far been successful in not getting any effective resolution passed for holding it responsible in either UN or UN Security Council.

China does not look upon the Quadrilateral Security Dialogue (Quad) in the Indian Ocean favorably. The Quad consists of US, Australia, Japan and India. Beijing wants to have its command over Indian Ocean and South China Sea. Hence it is instigating North Korea to show aggressive postures against South Korea.

Similarly the present India-China standoff is provoked by Beijing at Ladakh sector. Further to keep India on tenterhooks it has instigated Nepal to claim areas of Lipulekh, Kalapani and Limpiyadhura which are parts of Uttarakhand state in India. New Delhi is building road in this frontier area to facilitate travel by pilgrims to holy Mansarovar in Tibet. Nepalese Prime Minister KP Sharma Oli is a known friend and ally of Beijing who saved him to retain his prime ministership when he was in a crisis. Oli issued a new map, contradicting the treaties signed with India, and got it approved by the Nepalese Parliament. Though India offered to resolve the issue through dialogue, Oli went ahead with his design and made it a national issue and the opposition parties were obliged to support his design. Later there were minor skirmishes at India-Nepal border and ill behaviour towards Indians. India failed to diplomatically handle its immediate neighbour, Nepal which has now played into the hands of Beijing.

As regards, Pakistan it is already China’s “all weather friend” which conducts provocations at the border and exports terrorism to India. Beijing supports it by defending its terror group at international fora. With both Pakistan and Nepal turning unfriendly to New Delhi, the process at the South Asian body, SAARC will be derailed for some time.

On June 15 at 11.30 pm India-China standoff at Galwan valley in eastern Ladakh turned violent with pelting of mountain rocks, nail-studded rods and other improvised weapons. This resulted in death of three Indian soldiers including an officer on duty and leaving 17 others seriously injured who later succumbed to death. There were casualties on both sides. The Chinese side has so far not come out with the exact number of casualties it has suffered. Although Hu Xijin Editor-in-Chief of Global Times, a Chinese government mouthpiece, admitted in tweet that the Chinese side also suffered casualties. The Chinese side attacked not only with mountain rocks but also with nail-studded rods and other improvised weapons.

Beijing views India as an adversary which is coming close to Donald Trump. It will be difficult for India to defend China at WHO in face of a large number of countries trying to unearth the cause of corona virus being used at bio-weapon. Some experts believe that the virus was bio-engineered at Wuhan lab. Chinese doctor Li Wenliang who died in February due to infection by coronavirus was under arrest for trying to reveal the truth. A senior medical officer of the Chinese government, Dr Zhong Nanshan has said that Beijing kept silent at the very beginning of the COVID-19 outbreak. These incidences raises doubts about the virus being lab generated. Added to the confusion was the US funding of $37million for the study at Wuhan lab during Obama regime. The contract was signed by Dr Anthony Fauci on behalf of US and who continued to work in the project even after US withdrawal. Dr Fauci was sacked by Trump recently as advisor to his administration on COVID-19. Now President Donald Trump should boldly and clearly say about the purpose of Obama Administration signing such an agreement, instead of just calling COVID-19 virus as “Chinese virus”

Interestingly, President Trump was initially in favour of the use of Hydroxychloroquine to contain the spread of coronavirus. He imported Hydroxychloroquine from India in large quantity. Now FDA has approved the use of Remdesivir for emergency treatment. Remdesivir is an antiviral drug developed by Gilead Sciences in US. Interestingly China holds the patent to the drug through an agreement with Gilead’s drug patent sharing subsidiary UNITAID. As a coincidence UNITAID has a bio-research office near Wuhan. WHO has a permanent seat in UNITAID Board and is represented there by former Chinese director of health Ren Minghui. Bill & Melinda Gates & George Soros funds UNITAID. Gilead Science was a major financial donor to Hilary Clinton’s political campaign. The politics of powerful drug lobby is a challenge for Trump!

India is, however, caught in the web of the great post-COVID game being played out by the great powers. It has to carefully work out its strategy.