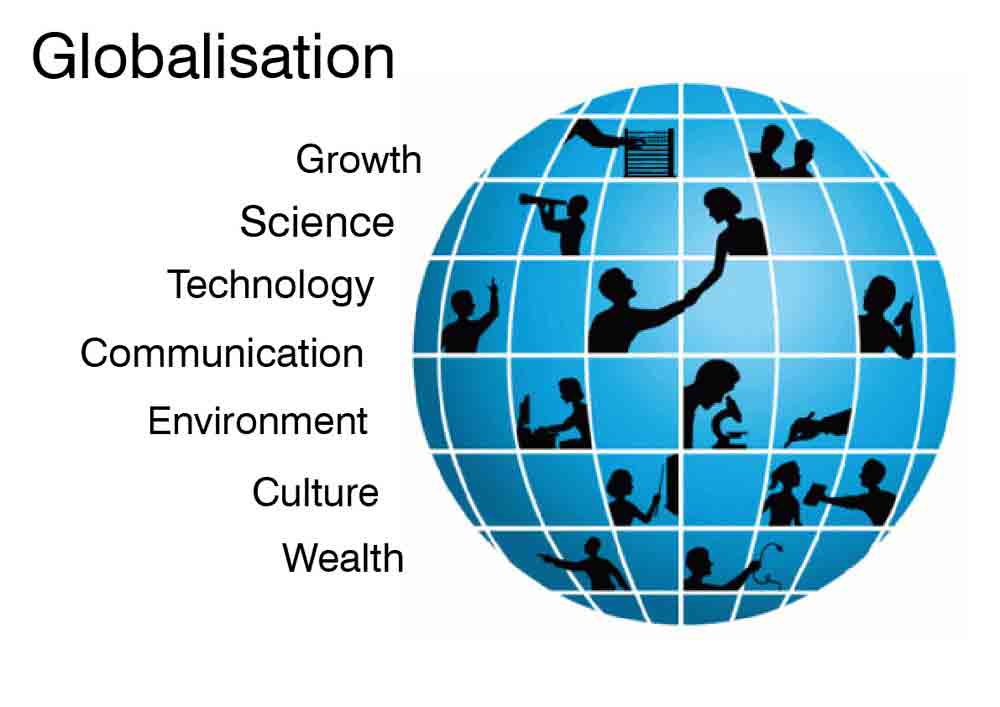 Giddens defines globalisation as the intensification of worldwide social relations linking distant localities in such a way that local happenings are shaped by events occurring many thousands of miles away and vice versa. Although every attempt at classifying the processes of globalisation necessarily results in oversimplification and a reduction of complexity, Giddens defines four dimensions of globalisation. The most obvious one is the world capitalist economy. “The main centres of power in the world economy are capitalist states – states in which capitalist economic enterprise is the chief form of production. The domestic and international economic policies of these states involve many forms of regulation of economic activity, but […] their institutional organisation maintains an “insulation” of the economic from the political. This allows wide scope for the global activities of business corporations, which always have a home base within a particular state but may develop many other regional involvements elsewhere. […] The biggest transnational companies today have budgets larger than those of all but a few nations. But there are some key respects in which their power cannot rival that of states – especially important here are the factors of territoriality and control of the means of violence. […] If nation-states are the principle “actors” within the global political order, corporations are the dominant agents within the world economy” (Giddens 1991: 70/71). The influence of any particular state within the global political order is strongly conditioned by its level of wealth (and the connection between this and military strength). The nation-state system, the second dimension of globalisation, has long participated in the reflexivity characteristic of modernity as a whole. “The very existence of sovereignty should be understood as something that is reflexively monitored. Sovereignty is linked to the replacement of “frontiers” by “borders” in the early development of the nation-state system: autonomy inside the territory claimed by the state is sanctioned by the recognition of borders by other states.” (Giddens 1991: 72-74) “The third dimension is the world military order. As a result of the massive destructive power of modern weaponry, almost all states possess military strength far in excess of that of even the largest of pre-modern civilisations. Many economically weak Third World countries are militarily powerful. During the Cold War, the two most militarily developed states, the United States and the Soviet Union, built a bipolar system of military alliances of truly global scope. The countries involved in these alliances necessarily accept limitations over their opportunities to forge independent military strategies externally.“ (Giddens 1991: 74/75) “The fourth dimension of globalisation concerns industrial development. The most obvious aspect of this is the expansion of the global (international) division of labour, which includes the differentiation between more and less industrialised areas in the world. Modern industry is intrinsically based on division of labour, not only on the level of job tasks but on that of regional specialisation in terms of type of industry, skills, and the production of raw materials. There has undoubtedly taken place a major expansion of global interdependence in the division of labour since the Second World War. […] One of the main features of the globalising implication of industrialism is the worldwide diffusion of technologies. The impact of industrialism is plainly not limited to the spheres of production, but affects many aspects of day-to-day life, as well as influencing the generic character of human interaction with the material environment. […] Yet industrialism has also decisively conditioned our very sense of living in “one world”. For one of the The four dimensions of globalisation according to Anthony Giddens GLOPP, 2007 2 most important effects of industrialism has been the transformation of technologies of communication.” (Giddens 1991: 76/77) A further and fairly fundamental aspect of globalisation, which lies behind each of the various institutional dimensions that have been mentioned, might be referred to as cultural globalisation.

India to Change Its Decades-Old Reliance on Female Sterilization