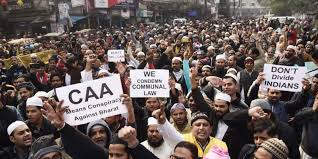 CITIZENS HAVE SHOWN THE PATH TO CONSTITUTIONAL SECULARISM
The anti-CAA protests have entered a critical phase with the courts taking cognizance of them. Though it can end only with a court verdict, the judicial process is taking long. So far the protesters remain leaderless and without any organizational strength. The brutal police crackdowns on the protesters in Delhi and elsewhere have only helped the agitation to expand to other parts of the country. However, the demonstrations are going nowhere, while inviting violence in some places.

The JP movement threw up many socialist leaders like Lalu Prasad Yadav, Mulayam Singh Yadav, and Nitish Kumar et al., who became regional chieftains later. Delhi chief minister Arvind Kejriwal has emerged from the Anna Hazare anti-corruption movement. Though the issue is emotive, so far no leader of significance has emerged from the anti CAA movement. In the absence of effective leadership and dedicated workers, the protests risk fizzling out.

While Prime Minister Narendra Modi has accused the Congress and the Left parties of instigating these protests, they have not come up-front except the Trinamool Congress and the Left parties. The opposition parties now have the opportunity to bandwagon on these protests to take on the Modi government, but they would have to step up from being quiet backers to forceful opponents against the CAA. It is clear that the moment calls for a mature leadership to handle the issue in a pragmatic and peaceful way. Already Delhi has recorded 42 deaths and many hundreds are injured in days of communal violence. This kind of mindless violence is not going to take the issue anywhere as the government is determined not to backtrack on the CAA. Even if the government is ready to negotiate, with whom will it negotiate?

This is where the Congress party is missing an opportunity. Being the oldest national party, the Congress has not been able to seize the moment and lead the protests because of the leadership crisis within the party. Secondly, it is unable to build a credible secular narrative stressing the point that it was the Congress which provided a major contribution in the framing of the Constitution. Lakhs of protestors reciting the preamble of the Constitution have given a fresh boost of life to the idea of secularism. Thirdly, the Congress is not clear about its ideological narrative while the BJP has been able to project its Hindutva ideology successfully.

Currently, the Congress is in power in seven states including Maharashtra, Chhattisgarh, Madhya Pradesh, Puducherry and Rajasthan. It can easily make an impact at least in these states. Several non-BJP chief ministers have also declared they will not implement the CAA and NRC in their states.

To its dismay, the Congress party is unable to get the support from the opposition. Congress President Sonia Gandhi convened a meeting of 19 opposition parties before the budget session last month, but major parties like the Trinamool Congress, SP, and BSP and even its ally the DMK stayed away. Earlier, Sonia Gandhi declared that “Congress Working Committee must categorically declare that millions of Congress workers will stand shoulder to shoulder with people of India in their struggle for equality, justice and dignity”. The party also held flag marches on its 135th Foundation Day on December 28 last year. The Congress MPs in both Houses wore black badges while attending the President’s address to the joint session. Sonia Gandhi led a protest near the Mahatma Gandhi’s statue in Parliament complex to express solidarity with the anti CAA protestors. A high-level Congress delegation called on the President and urged him to intervene and withdraw the CAA. The question is whether these are enough and whether they have made any impact apart from the BJP accusing the Congress of instigating the protests.

The problem is that the Opposition remains divided. They also will have to counter the forceful campaign of the BJP and the Modi government, which could generate a Hindu backlash. The BJP has mobilized the Sangh Parivar to run counter-campaigns to convince people about the need for the CAA .The Modi government is also trying to counter the negative and unflattering publicity in the foreign media on the riots and other human rights issue. It was not flattering. On the day of the voting of the impeachment of President Trump, the three most influential newspapers in the US – the New York Times, the Washington Post and the Wall Street Journal – had India on their front pages with critical and unflattering stories.

With the second part of the budget session beginning on Monday, there still is no evidence of the opposition unity. It is a question of who will bell the cat as leaders like Mamata Banerjee and Mayawati are not willing to work under the Congress leadership Even the Left parties are unhappy with the Congress for going to the President solo. It appears to be a missed opportunity for the opposition including the Congress as the issue is emotive, sensitive, political and social and needs an early full stop.