MAY DAY HAS A NEW MESSAGE IN THIS PERIOD OF PANDEMIC 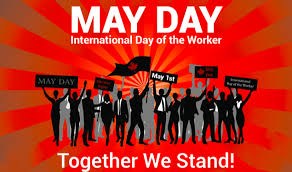 PLEDGE TO BUILD A NEW WORLD NEEDs RENEWAL
May Day is a day of celebration. It is celebration of labour and labourers who are the creators of the wealth of the nations. It is a day to demonstrate the strength of the working people, alliance of workers and peasants, unity of the trade unions and labour movements and to express solidarity nationally and internationally.

COVID 19 pandemic is haunting the whole world. It has been devastating the life of the people due to mass unemployment, poverty, hunger and despair. The conditions are worsening further as the economic inequality grows. The poor and the working people are pushed into miseries and bear the burden of lockdown the world over. This situation has placed huge challenges before the working people and their political and trade union organisations.

May Day has a glorious history. For the first time in May 1886 the Chicago Hey market witnessed a heroic struggle of the working people who demanded an eight-hour working day. It was a demand to tell the capitalists that because they had appropriated the means of production as private property it did not mean they could ruthlessly force the workers to slog for endless hours without compensation to produce the surplus. It was to convey the message that working people would not succumb but fight for their rights. In this heroic struggle several workers were martyred. The Chicago Hey market struggle inspired the entire working masses of the world. The Second International of the workers of the world in which Engels, the companion and Comrade of Karl Marx, played a leading role, declared in 1889 that May Day would be observed as an International Day for working people.

In India too, we have the heroic history of working class struggles. It is a matter of pride that May Day was first observed in India way back in 1923 in Chennai. The trade union movements started emerging during British and French rule in India. The jute workers of Calcutta got organized under trade union in 1854. The Madras press workers union was formed in 1903 and Coral Mill workers union in 1908. In fact, though AITUC was founded in 1920 and we are proudly celebrating the centenary of AITUC this year, the B & C mill workers in Chennai organized a trade union and got it Registered on April 3, 1918. This was the first registered trade union in India. The textile mill workers of Pondicherry (Puducherry) were fighting for eight-hour working day under the leadership of the Communist Party of India. On July 30, 1936 there was a brutal attack on the workers and 12 of them were martyred. This finally forced the French colonialists to accept the demand for eight-hour working day, first in Asia.

During those days when the people of India were fighting for independence from colonial rule the trade unions stood in the front line of the national movement while fighting for their immediate demands like wages and service conditions. The trade union struggles got intertwined with political struggles.

Even today the working people have to play a leading role in the fight against the present government. The BJP-led NDA government is aggressively attempting to change the existing labour laws and to bring new ones in order to curtail the rights of the working people. One can see this in the attempt to increase the working hours to 12. The present government of BJP-RSS combine is a government committed to neo-liberal globalisation. The workers of India need to remember the words of Fidel Castro in his address at Central University of Venezuela in 1999 that “neo-liberal globalisation wants to turn all countries especially all our countries into private property”.

Already there is huge disparity between the rich and the poor in our country. The corporate houses and big business houses are looting the country and controlling the government to enhance their plunder. Having political power in their hand the BJP-RSS combine is promoting its own agenda of subverting the Secular Democratic Republic of India and making it a Hindutva rashtra. This emerging situation demands that working people must have political and ideological education to make them organizationally a massive striking force. Of course, the trade unions must take up the immediate economic demands of the working people. The politicisation of working people is equally important. Politics is nothing but economics.

The world capitalism is sick and sinking into further deep crisis. Instead of spending on public health, education and social infrastructure, there is competitive spending on military and war equipment. The report released by Stockholm International Peace Research Institute reveals that India is third biggest military spender, first and second being the US and China. This raises the question of alternative in the interest of peace and development of the world. Socialism is the only alternative. But there is lure for fascism and neo-fascism. This trend is encouraged by the corporate capitalists.

This situation demands that working people will have to emerge as a force which can bring a real change. As the Manifesto makes the clarion call that “let the ruling classes tremble at a communistic revolution. The proletarians have nothing to lose but their chains. They have a world to win”.

On this May Day, while saluting the working people for their revolutionary historic role, the CPI hails this May Day to renew our pledge to fight for Socialism, a society free from exploitation, injustice and all forms of discriminations.

Let us observe this May Day in the given lockdown situation reaching out to the needy and vulnerable toiling masses of our great nation. Let the working people rise against BJP-RSS rule as they rose against British and other colonial rules.

MENTAL HEALTH IN THE PERIOD OF CORONA PANDEMIC