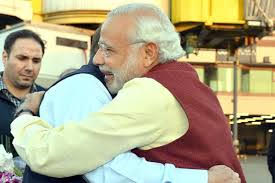 January 16 : In what is presently widely being termed in the international omniscient official circles of all hues as resounding victory of ModiGeeree ( {Mahatma} GandhiGeeree of 2016=ModiGeeree ) — to be adopted/persued/perfected/followed by many countries in the ensuing days to solve their respective nagging thorny issues and retain peace — Pakistan is the first country to tamely allow itself be stumped by it after decades’ persistent promotion of macabre insurgency in India in one pretext or the other. Its evident in Pakistan tamely agreeing to stall yesterday’s mammothly tom-tomed — by Pakistan itself to show their superiority over India as earlier — Foreign Secretary level talks between the two countries, assuring to send a fact-finding delegation to India to ascertain Pakistan involvement in terrorist attacks in Pathankot Air Base this week. This will be for the first time, admit diplomats in India. They do confess, this has been possible because of Prime Minister Modi’s “Successful ModiGeeree” under which, he airdashed to Pakistan unannounced, embraced Pak PM Mian Nawaz Sharief, heartily, went with him for 1-to-1 parleys, flew back to New Delhi stunning all in Pakistan, World as well.

America welcomed it whole heartedly. United Nations praised it openly. Other countries too followed suit. Prime Minister Modi’s ModiGeeree instantly became a rage in the whole world. They anyway were closely following his globally promoting  GandhiGeeree. Now they are hooked to his ModiGeeree, globally successful innovation by Mr Modi himself. They were stunned as to how today in the world of open communication/s wherein, nothing is secret, “Mr Modi succeeded in flying to Pakistan without letting any one know about it or letting any one get even a hang of it”. This is being adhered to Mr Modi’s astute ModiGeeree, now rage all through the world. At the time of writing, in 2016, this ModiGeeree is the current Art of Diplomacy, many are trying their best to perfect it to perfection. In the days to come, many of them may well attend guest lectures on it by Mr Modi himself.

Under the circumstances, it is only obvious that the current global credibility of Modi’s leadership is extremely high, like it or not (in context of Pakistan, that is). It is fully now realized/felt/pinched by Pakistan. As its direct fallout, three days before foreign Secretary level talks between India and Pakistan,on January 13, Pakistan agreed to postponement of it although prior to that, most excited about it was Pakistan itself, aver officials in the know of it. Even while Pathankot Air Base was being attacked by the Pakistani ultras — their ownership owed by Jaish-e-Mohammad—back in Pakistan, its officials harped on Secretarylevel talks on January 15, 2016. Even when Pathankot Air Base was attacked by the Pakistani Terrorists, they went on harping on it thereby evincing that they considered India to be weak. They did not apprehend, if wishes always were horses, beggars would ride on them. This time it would not be so. And so it was not.   …On 2 January 2016, a heavily armed group attacked the Pathankot Air Force Station, part of the Western Air Command of the Indian Air Force. Six attackers and three security forces personnel were killed in the initial battle. The gun battle and the subsequent combing operation lasted about 17 hours on 2 January. The attackers, who were wearing Indian Army fatigues, were suspected to belong to Jaish-e-Mohammed, an Islamist militant group designated a terrorist organisation by India, the US, the UK and the UN. The attack was described as a terrorist incident in the Indian and foreign media.

A further three soldiers who were admitted to hospital with injuries died, raising the death toll to seven soldiers. On 3 January, fresh gunshots were heard, and another security officer was killed by an IED explosion. The operation continued on 4 January, and a fifth attacker was confirmed killed.TheUnited Jihad Council claimed responsibility for the attack on 4 January.

The hijacking of a car of a superintendent of the Punjab Police the previous day was reportedly linked to the attack. People hijacked his car for transport. They did not know that it was a police car since the police lights were off. Media reports suggested that the attack was an attempt to derail a fragile peace process meant to stabilise the deteriorated relations between India and Pakistan, as several pieces of evidence were found linking the attackers to Pakistan.

Prime Minister Narendra Modi condemned the attack, saying, “Today, enemies of humanity who can’t see India progress tried to strike at our strategic area, a prominent airbase at Pathankot. I appreciate our armed forces and thank them for foiling our enemy’s attempt.”[62]

President Pranab Mukherjee also condemned the attack and sent condolences to the families of soldiers who lost their lives. He also sent compliments to soldiers for their valour and courage while fighting the terrorists.[63]

Minister of Home Affairs Rajnath Singh said, “Pakistan is our neighbouring country. We want good relations with not just Pakistan but with all our neighbours. We also want peace, but if there is any terror attack on India, we will give a befitting reply.”[64]

The attack was seen as an attempt to undermine the India-Pakistan peace process. Almost all major Indian newspapers published editorials advising the Indian government to “stay the course” and not serve the purpose of the attackers by stalling or suspending the peace dialogue with Pakistan.

The Pakistan Ministry of Foreign Affairs issued a press release condemning the attack and offered condolences. FO spokesman Qazi Khalilullah said. “Building on the goodwill created during the recent high-level contacts between the two countries, Pakistan remains committed to partner with India as well as other countries in the region to completely eradicate the menace of terrorism afflicting our region.” Pakistan also complained that India accused the Pakistani state of the attack. Special assistant to Prime Minister Nawaz Sharif, Irfan Siddiqui, said, “India should understand that Pakistan itself had been one of the greatest victims of terrorist attacks on its soil.” He regretted that only after a few terrorist attacks India begins hurling baseless allegations. He advised India to review its stance by further saying, “India should create an environment of trust, as unfounded allegations only hamper the process of dialogue.” Former foreign secretary of Pakistan Riaz Khokhar said, “India was trying to tarnish Pakistan’s image and is using such attacks to derail talks. Pakistani news channel ARY News reported today that “some arrests” have been made in this regard but police did not confirm any arrest related to the Pathankot attack.

“The intelligence agencies have picked up some suspects from Bahawalpur on the leads provided by India in Pathankot airbase attack and shifted them to undisclosed location for interrogation,” the news channel reported.   …Tomtoming of January 15 bilateral talks between Pakistan Foreign Secretary and Indian Foreign Secretary still persisted in Pakistan as if nothing had happened in Pathankot. In India of course predictably, vacillation on the so-called talks began gaining ground. Opinions against the talks gained grounds as hours ticked by.

Today, the so-called bilateral talks stand officially postponed. To another date…when, it will be announced, if at all…Meanwhile, the arrival of Pakistan delegation in India is awaited, thanks to the world pressure led from front by USA+Mr Modi’s virtuoso ModiGeeree consummated.