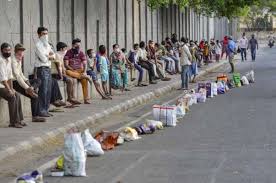 ASSAULTING HEALTH WORKERS NOW BETRAYS WORST OF HUMAN NATURE
The cry of the peacock, birdsongs at dusk and dawn song— these are the sounds one now hears in the part of Noida where I live. Until a few weeks ago, the only noise that overwhelmed us was that of vehicles. But while the return of nature’s sounds should occasion joy, the circumstances we find ourselves in, with the relentless march of the coronavirus disease (Covid-19) fill us with fear and trepidation. The number of positive cases is still rising every day, and so is the death toll.

Scientists seem to believe that this pandemic will wreak more havoc on the world than those before it. This is why governments all over the world have prohibited the movement of people. Half of world is also under a lockdown, underlining the common challenge humanity confronts,
India has been under a complete lockdown for the last two weeks. Most people are voluntarily following the restrictions, but there are some, either due to ignorance or arrogance, are not ready to make the sacrifices needed to deal with the pandemic. This is dangerous, for they are at risk of not just harming themselves, but communities around them.

On Friday, dozens of people gathered in Kannauj city to offer prayers. The police and administration tried to convince them that this was not the right time or way to do this. Several Muslim scholars including the ulemas of Deoband, Bareili and Firangi Mahal, have already said that during the hour of crisis, it is appropriate to offer namaz at home. But the crowd was not willing to listen. The situation became tense and the gathered congregation attacked the police. They then proceeded to set fire to a police post. It was only when a large contingent of police arrived that the crowd was chased away.

This is not an isolated incident. There have also been cases on attacks of teams of health workers.

Who are these people who are attacking the true warriors at the frontline of this battle? Is this spontaneous or orchestrated? If it is latter, who is planning it? Do these individuals not understand that by their appalling and criminal behaviour, they are putting in danger human lives?

The renowned poet, Rahat Indori, was so shaken up by the incident of assault on doctors in Indore that he said, “Tell me which house was it there when doctors and health workers were spat on, so that I can go there and touch their feet, plead that they should have mercy on themselves, their community and their country.”

Ever since the Tablighi Jamaat incident, which has led to India’s sharpest spike in cases, there has been a constant effort to vitiate the atmosphere. There must be no attempt to communalize the situation. At the same time, it must be recognized that not only was the gathering wrong but members of Jamaat, who were kept in quarantine, have behaved appallingly, completely at odds with what is expected from religious persons.

In the government hospital in Ghaziabad, where the reports suggested they harassed health care workers, particularly women, their behaviour was outrageous. In Agra, their compatriots refused to eat simple food served to them. Before this, some of them protested against being tested because that was against their religion, This is the first time that people have behaved in such an irresponsible manner on a vital public health care issue, citing religious reasons.

According to health ministry, as many as 1,445 people linked to the Tablighi Jamaat gathering tested positive for the coronavirus, accounting for 35% of all cases of infection in India. The health ministry has also pointed out that this has undermined the potential benefits of the lockdown.

This kind of uncivilized and irresponsible behaviour will only strengthen fundamentalists in other religions. Arguments and debates on social media provide ample evidence of this. Are we moving forward as education progresses or going back to some sort of medieval barbarism?

There is no doubt that by implementing the lockdown in time, the spread of Covid-19 has been limited. It has given government enough time to prepare to contain the virus and ramp up the health infrastructure. Optimists even though initially that this would save us from entering the third phase: Community transmission, where the source of the infection is not known, thus showing its wide spread.

Unfortunately, poor planning of the lockdown, which resulted in exodus of migrant workers from cities, followed then by the movement of infected people from the Jamaat congregation in 20 states, have raised new doubts and fears about the spread of the virus.

Will the government have to extend the lockdown after April 14? The government will have to take a considered, careful decision.