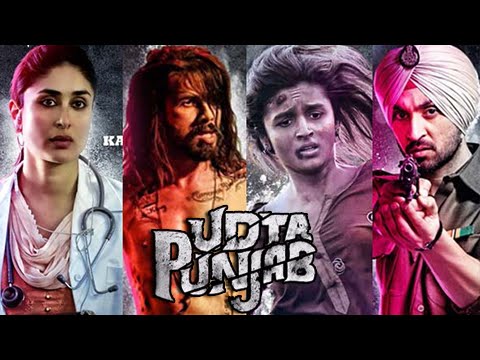 The controversy over Udta Punjab is a global phenomenon and it is slowly eating up the entire globe. Epicentre is not Punjab , the entire World. The Bombay High Court guided the Central Board of Film Certification (CBFC) Chief , Mr. Pahlaj Nihalani to be cool and interfered saying the primary duty of the board is to certify not to censor the films.

Freedom of speech and expression is the concept of being able to speak freely. It is often regarded as an integral concept in modern liberal democracies. Films have also been accepted as a form of speech and expression. Hence, the banning of the films brings us to the cardinal question do we have the freedom of speech and expression? Films have been banned/censored because of issues related to obscenity, sex and violence but this issue does not intend to get into those factors rather it deals into the other factors. Many films are banned/censored or targeted in the name of maintaining public order; respecting beliefs, sentiments and traditions; or for criticizing the state on a certain issues and these are the areas the article primarily focuses in. Again, the issue related to Udta Punjab does not go into intricacies of the subjective matter of the problems; instead, it limits itself to testify the legal validity of the bans/censoring in the light of the freedom of speech and expression. In this quest, it presents some controversies in the recent times, highlights certain judgments and relevant legal provisions and finally verifies the legality of such bans/censoring.

Films like Water, Fire, two films Aandhi and Kissa Kursi KaKissa Kursi Kaa ( these two movies turned out to be the most controversial film ever made in the history of Indian cinema. The film was accused of scathing criticism of the functioning of the Central Government under Mrs. Gandhi. The film’s negative was burnt by the then ruling party minister and the film had to be re-shot.) All these incidents represent the arbitrary nature of the authorities, various groups or political parties and their die-hard efforts to curb the freedom of speech and expression through films which fell out of their taste. The filmmakers, to exercise one of the most coveted right, had to depend either upon the whims and fancies of those elements or to fight legal battles; still there are many films which never saw the light of the day.

In the words of Ritu Menon (for Women’s World Organisation for Rights,
Literature, and Development ) , “Censorship is when a work of art expressing an idea which does not fall under current convention is seized, cut up, withdrawn, impounded, ignored, maligned, or otherwise made inaccessible to its audience.” Censorship in India is the Central Board of Film Certification or Censor Board, which comes under the purview of Ministry of Information and Broadcasting. The Board regularly orders, directors to remove anything it deems offensive or subjects considered to be politically subversive. The censorship of films is governed by the Cinematograph Act, 1952. It assigns certification as Universal, Adults, and Parental Guidance to films in India before public exhibition.  It has been known that motion picture have also been regarded as a form of speech and expression in India, it is pertinent to look at the ambit of this freedom under the international and national law regime. We have also similar provision of freedom of speech and expression under Article 19(1)(a) of our Constitution which is guaranteed to all the citizens along with ‘reasonable’ restriction under Article 19(2) on certain grounds.ICCPR also recognizes this right ‘in the form of art’ which includes films. So far censorship of films in India is concerned, the power of legislation is vested with the Parliament according to Entry 60 [19] of the Union List of the Schedule VII under the Constitution. However, the States can also make laws on cinemas under Entry 33 [20] of the State List but subject to the provision of the central legislation. The prime legislation in this respect is the Cinematograph Act, 1952 (hereinafter referred to as ‘1952 Act’) and the Cinematograph (Certification) Rules, 1983 (hereinafter referred to as ‘Rules’).

These laws are so broadly classified that cases can be impossible to quash, because it is difficult for a judge to take the view that some of speech does not promote hatred between groups. There is no chance that these laws can be struck of the legislations. Politically, nobody will do it, because we have such a huge vacuum of leadership that nobody has the guts to step up and suggest such changes. Rather this movie is a message.

Censorship is very rarely a good thing unless it is to protect young viewers from disgusting imagery. Otherwise the idea of censorship to be one that is truly revolting at my base. Censorship does more harm than good and has no place in a society. It is seen as evil by some, but it is mostly subjective and thus no one person has jurisdiction to remove it completely. According to the UN’s universal declaration of human rights in 1948, it is stated, “Everyone has the right to freedom of opinion and expression. The right includes freedom to have opinions without interference and to seek, receive and import information and ideas through any media and regardless of frontiers.” Humans are different from animals because of one major reason. We have the right to think, express and have freedom. North Korea’s government censors all the outside, information and current news, blocking its citizens to grow up to be a free, global individual. This countries government does not have the right to take away all the individuals rights to know what’s going on in this world.

Addiction is a global phenonmenon and a mental disease. It is eating up the social fabric slowly. It has become a family disease because it affects everyone of the family who is involved with the addict. Countries like Afghanistan, Columbia, and Jamaica have had their economies rocked and destabilized by the illegal market while bribery, corruption, and conflict have ruled. There would be clear information and awareness about the risks involved and guidance on how to seek treatment. It is time to allow adults the freedom to make decisions about the harmful substances they consume. A stable and contained problem is easier to address than one which is expanding chaotically, provided it is seen as an opportunity for renewed commitment rather than an excuse to decrease vigilance. There are the two major legal drugs that kill far more people than illegal drugs: tobacco and alcohol. Although these are legal and regulated, they continue to put enormous strains on social systems such as police and health services. In the World, an excess drinking culture is affecting many young people and is a constant theme on mainstream news. Drug addiction erodes a person’s self-control and ability to make sound decisions, while sending intense impulses to take drugs. Recovery requires total abstinence. One has to follow a spiritual lifestyle. Finally We have to Live Spiritual and Think Spiritual and awareness on abuse will change the Youths not by banning or censoring films, which is a replica of the society.

ALIMCO- A Force Behind Empowerment of Persons with Disabilities (Divyang)