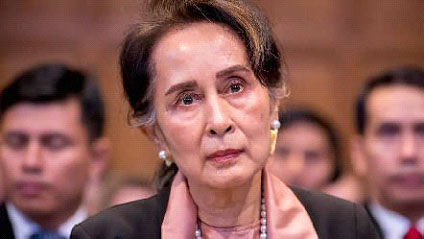 Myanmar has been again in turmoil with the country’s democratically leader AungSan Suu Kyi was ousted in an army coup in February this year. Myanmar’s junta has said that it would not engage in talks with coup dissidents, including members of Aung SuuKyi’s ousted government, after a loyalist said dialogue was

necessary to save the country. The head lawyer representing Mynamar’s ousted leader Aung San Suu Kyi has said that authorities in the military ruled country had issued a gag order on himbecause theysaid his communications could cause instability.

Suu Kyi led civilian government after the party swept a 2015 election called the military stepped back fromhalf acenturyof direct rule. The February coup ended a decade of tentative steps towards democracy and economic stagnation. Reports also say that she has been put in solitary confinement.

In courage and determination she wassecond to none and became one of world’s most prominent political prisoner. As far back as 1999, Time Magazine named her one of the children of Gandhiand a spiritualheir to non- violence. She survived an assassination in 2003 in a massacre in which, at least, 70 people died. SuuKyi, as predicted, has turned out to be a great leader of the 20th century. In endurance she can be likened to Nelson Mendela. In courage and determination, she may be compared to Indira Gandhi.
Suu Kyi is the daughter of Burma’s national hero,Aung San, who led the struggle for Independence from British colonial rule and from Japanese occupation. His stature in Burma is almost the same as Netaji Subhash Chandra Bose in India. Aung San negotiated with Clement Attlee’s government for final independence but, sadly, Aung and Practically and his entire cabinet in the provisional government were gunned down on July 19,1947.

Suu Kyi was only two then and has dimmest recollection of her father. But she learnt a lot about him and later became virtually obsessed with his image. Needless to say she inherited the qualities of his father whom she had unfortunate never known. Suu Kyi, few would know, graduated in Delhi’s Lady Shriram College besides Rangoon and Oxford universities.

Before returning to take care of her dying mother, she lived a happy married life at Oxford with her two children. Itwas possiblycoincidental that with her return began a spontaneous revolt against the political repression in Burma. She emerged as the popular and most effective leader of uprising. Suu has
become more effective since then and the ruling Junta was scared of her.

Suu Kyi has tragedies too in her eventful life. Her husband Michael Aris died in a British hospital. Myanmar’s military government denied permission to Aris, who was ill with prostrate cancer, a visa to Myanmar and see his wife one last time before he died.

On the contrary, they were very keen to persuade Suu Kyi to visit herailinghusband in UK. The military rulers obviouslywanted to exploit the personal tragedy of Suu Kyito push her out of the country, thereby, get rid of the of a major irritant.

Locked ina relentless political battle for restoration of democracy in Myanmar and emancipation of the suppressed for over a decade, her response reflects her iron will. “My personal plight is insignificant compared to sufferings of hundred of my countrymen, many of whom are still in jails.” Having dealt with dubious way of the military rulers, she knew too well once she leaves the country, she would never be allowed to return home.