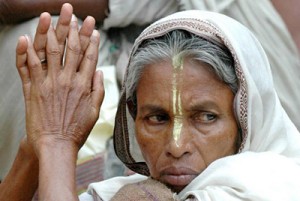 Widowhood is defined as the status of an individual who was legally married to someone who subsequently died. As per the 2011 census, there are 5.6 crore widowed persons in India. Women outnumber men accounting for nearly 78% of total widowed population. Between 2001 and 2011, 89.71 lakh widowed persons were added.

Several factors may explain the imbalanced gender ratio among the widowed. Firstly, women experience greater longevity than men. The life expectancy in India has increased from 62.3 years for males and 63.9 years for females in 2001-2005 to 67.3 years and 69.6 years respectively in 2011-2015. Secondly, wives are generally younger than their husbands, a fact that increases their probability of surviving their spouses even without the differences in longevity.

The widows, as per Census data, can be seen from the age-group perspective also. 0.45% of the total widows are the Child Widows in the age group of 10-19 years.  9.0% are in the age group of 20-39 years, 32% in the age group of 40-59 years and 58% are above 60 years. Widows in different age groups face specific challenges pertaining to loss of adolescence, access to employment, skill development, property rights, shelter, access to healthcare etc. Further, it is indeed a matter of concern that we still have 1.94 lakh child widows despite the Prohibition of Child Marriage Act, 2006.

Along with the increasing number of widows, the attitude to widowhood is changing. The suppression of widow in the name of widowhood is gradually vanishing and widows are taking up jobs, attending functions and ceremonies and getting mainstreamed in the society. However there are pockets in the country where entering into widowhood still remains painful and humiliating to women than to a widower because of the discrimination, ritual sanctions of the society against widows. Widows in some areas still have limited freedom to marry, have insecure property rights, experience social restrictions on living arrangements, have restricted employment opportunities and also lack of social support. There is little understanding of the problems they face and the general schemes are not enough to cater to their problems and improve their condition. Further there is lack of data with regard to their economic conditions for the purpose of identification of the most vulnerable and marginalized groups among widows. While the census enumerates widows, credible analytical studies on status of widows and challenges faced by them in accessing social protection and other empowerment provisions are not available. In the absence of any other data, the present analysis is based upon the Census data (which is demographic in nature), existing government schemes and programmes for widows, and legislative interventions.

The Government has been looking at the special position of widows and has initiated a number of interventions.  Many state governments have formulated widow remarriage schemes. State governments have also formulated schemes for pensions to widows and for assistance to widows for the marriage of their daughters. Under MNREGA, special provisions have been made to identify widowed women who can then qualify as a household so that they are provided 100 days of work the death.

The Union Ministry of Women and Child Development has been giving emphasis to the issues related to widows for the last two years. One major issue faced by the widow is that after the death of her husband, she has to run from pillar to post to get her entitlements which often get delayed shows as she is unable to prove that her husband has died. Accordingly, the Ministry has undertaken a special drive with the state governments so as to ensure that the name of the widow is mandatorily mentioned in the death certificate of a man.

Keeping in view such circumstances, a new shelter home for widows is being established in Vrindavan, Uttar Pradesh which will have facilities for 1000 widows. This will be the largest ever Home for widows established or funded by the Government. It will be a Home with a difference since here widows will be able to learn and get skill development to enable them to use their time productively. The shelter home will give a new life to widows.

The recently announced Draft National Policy for Women places special emphasis on widows as a special category who need assistance, care and protection. The new policy will also bring about convergence on the issues of widows with single women as these cannot be addressed in isolation without referring to the issues concerning the broad category of single women which includes widowed, divorced, separated or never married. This will enable special attention to be given on the larger issue of vulnerability, both socio-economic, physical and psychological which single women including widows have to face.

However, there are certain challenges that require constant attention of the government. Effective implementation of Maintenance and Welfare of Parents and Senior Citizens Act, 2007 can automatically ensure a safety net of family care for widows. Universal coverage of pension for widows can bring sustenance and respectability for widows. It is important to encourage and incentivize couples to include the name of the wife into the title of her husband’s land and property. This will be a protection for widows after death of her husband. There is a need to provide age relaxation for widows to sit for competitive exams for government and PSU jobs.

Since the enactment of Hindu Widows Remarriage Act in 1856, there has been a definite change in the status of women. But there is a clear cut need to shift the policy framework from a welfare approach to that of empowerment to change the lives of widows in this country permanently.

Is Divorce a Taboo?