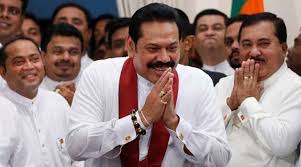 NEW DELHI SHOULD TRY TO WIN COLOMBO’S TRUST WITHOUT MUCH ADO
Sri Lankan Prime Minister Mahinda Rajapaksa is coming to India on a four-day visit on February 7. Reports from Colombo suggest that that during his talks with Prime Minister Modi, defence and maritime security will get priority.

When Mahinda’s younger brother Gotabaya won the presidential election in Sri Lanka with a massive mandate (52.25 per cent vote) in November last year and made his younger brother, former president Mahinda the Prime Minister, India was worried. The reason was that both brothers were considered close to China. The Sri Lankan Tamils were afraid because Gotabaya had liquidated the LTTE ruthlessly. The Muslims were also worried as to how the new government would deal with them after the Easter Sunday attacks by Muslim extremists.

However, Gotabaya sought to allay India’s fears by saying that he would pursue an independent foreign policy and there would be no “tilt” to either of his big neighbours and that he would take India-Sri Lanka ties to a new level. So far, he has lived up to his words. When Gotabaya visited New Delhi in late November last year, the talks between him and Prime Minister Modi were very cordial and fruitful. Modi announced that a credit line of $450 million, would be opened with Sri Lanka, including $50 million for fighting terrorism. The two leaders also discussed the problem of the minority Tamils in Sri Lanka and how to fulfil their aspirations.

The Sri Lankan press has reported that on the eve of his New Delhi visit, Mahinda said that his country “would not sell any national resource to foreigners”. The comment is significant. Though he did not name any country, political observers believe this is was an assurance to New Delhi that India need not be worried over China’s increasing footprint in the island nation. In fact, Sri Lanka has more reason to worry about China than India. The island nation’s total debt to China is estimated at over $15 billion. Colombo has already had to sell to China some of its critical assets like the Hambantota port, in lieu of repayment of the huge debt. The total external debt of China stood at $51.72 billion by end 2017.

India has agreed to develop both Colombo and Trincomalee ports. The decision has to be seen in the light of India’s shedding the earlier “laid back” attitude to Sri Lanka and increasing its presence in the Indian Ocean, where China is emerging as a rival of India in terms of naval strength. It is natural for India to try to deepen its friendship with Colombo and help in its development in every way possible, regardless of what the Chinese are doing. China’s debt-trap diplomacy has cost it public support in many countries including Sri Lanka which it has “helped” with liberal doses of loan. India does not evoke any such fear. Though India cannot compete with China in advancing loans to smaller Asian countries on a scale that China has been doing, even a limited participation in the development of these countries will earn India trust and friendship and generate a fund of goodwill.

New Delhi can also quietly persuade Colombo to give greater emphasis on the development of the Tamil-inhabited north of the country. The Tamils still stand in awe and fear of Gotabaya. The fear has to be dispelled and the Sri Lankan Tamils assured that they are equal citizens of the country. Given the bitterness of the long years of civil war, this will not be easy but a process must be set in motion to bring the Tamils, to use a cliché, “back into the mainstream.” So about the Muslims, inhabiting the east of the island, one Easter Sunday attack has made the entire Muslim community in Sri Lanka suspect in the eyes of the Buddhist population.

One advantage of Gotabaya is that he enjoys excellent rapport with the Buddhist clergy which has a strong influence on civil society. Buddhists constitute 70 per cent of Sri Lanka’s 22 million population. It may be recalled that way back in the Sri Lankan parliamentary polls in April, 2004, a political party constituted wholly by Buddhist monks fielded over two hundred and fifty candidates. It was the Jathika Hela Urumaya (JHU) (National Heritage Party). In seeking a reconciliation with the Tamils (and Muslims), Gotabaya has to tread on thin ice, because the majority community has strong antipathy toward the other two communities.

Taking a long term view of India-Sri Lanka relationship, New Delhi should try to win Colombo’s trust and confidence quietly. Success in this endeavour will reduce Chinese influence in that country. The situation is more propitious now than ever before. Sri Lanka has a strategic location in the Indian Ocean which is likely to become an area where both India and China will vie for dominating the waters. India is at a more advantageous position in this regard than China. Sri Lanka’s cooperation will be indispensable for protecting India’s long term interests in the Indian Ocean Region.