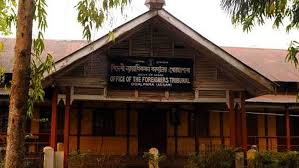 FOREIGN TRIBUNALS IN ASSAM FAIL TO DO JUSTICE
In parts of Assam, a strong undercurrent of tensions prevails in the post NRC (National Register of Citizens) updating exercise period. Wiser after the highly contentious headcount, bigger minority groups now insist that due legal process should decide citizenship issues, without any involvement of the special Foreigners Tribunals(FT). Leaders of the Citizens’ Rights Protection Co-ordination Committee (CRPCC), the largest HR group among the linguistic minorities, last week announced at Karimganj that they would approach the Prime Minister and other authorities in this regard. They proposed to launch a movement in the Barak Valley districts and other areas to intensify their struggle, according to Assam-based media reports.

As things stand, a further prolongation of the bitter, never-ending three-cornered legal wrangle involving the state/ central governments and the minorities in Assam, is on the cards. Incidentally, the Supreme Court -supervised NRC exercise on paper allows appellate opportunities for people who could not establish their citizenship.

But such relief is more illusory than real. The unlisted people in the final controversial NRC list still have to convince the FTs of validity of their claims to citizenship as before. They can go to the High Court only if they are rejected once more by the FTs. Seeing that the same FTs had already denied them citizenship, the authorities cannot be expected to budge from their earlier decisions under normal circumstances.

Which in turn means yet more harassment and the loss of precious time and money for the majority of the 1.9 million people left unlisted by NRC authorities. But this does not seem to bother either the state or the centre. Considering that Rs 1300 crore of the taxpayers’ money have been spent over the badly botched up NRC exercise, engaging thousands of officials over four years resulting among other things, the suicide of at least 50 people—- it is certainly time for all concerned authorities to think of other ways to detect illegal immigrants .

What the minority leaders now propose would eliminate the FTs and enable them to proceed directly to the next level in the legal process, involving the High court.

However, under existing arrangements as outlined by the SC, state authorities have already set up 100 additional FTs in Assam to quicken the processing of fresh applications from the large pool of 1.9 million people not listed as Indians. For the centre/or the state to yield to the fresh demand to keep the FTs out now under pressure from the minorities , comprising mainly Bengali Hindus and Muslims, would involve a serious loss of face . Clearly, the minorities in Assam must face yet another long bruising legal battle, especially the Bengali Muslims among them, not being entitled to enjoy any protective ‘ cover’ under the new Citizenship Amendment Act (CAA)

CRPCC leaders allege that much of the administrative chaos generated by the NRC operations, even under the direct supervision of the almighty SC , had occurred because of the utter ineptitude and misuse of authority on part of the dreaded FTs . The final NRC list has been summarily rejected by all shades of political and public opinion in Assam. It had naturally relied on the verdicts given by the FTs about the citizenship status of people as its basic data.

Most of the unlisted people are reportedly seeking legal remedies to protest their exclusion, which they feel are arbitrary, if not totally biased. From passports to Refugee certification, school and college documents, civic body and panchayat papers confirming tax and other payments — everything was rejected by the FTs as ‘not being conclusive evidence of citizenship’. Initially 15 documents were needed to prove evidence of settlement in Assam from before March 24, 1971, the cut-off date. But there were thousands of allegations of people being kept out of the list even if they put up 12 or 13 of such documents. No wonder the minorities do not want to go through the same trauma all over again.

What made matters difficult for common people was not only the allegedly unhelpful attitude of the FT officials. There was little relief for even established Indian citizens whose credentials came under scrutiny, as former state Ministers, MPs, MLAs, Indian army personnel, Vice Chancellors and professors who had been living in Assam for years learnt the hard way !

It was only after some instances of official highhandedness were reported in the media that their plight attracted public attention outside Assam, in other parts of India. Established HR groups stepped in. Reports filed by their representatives who visited the state to check things for themselves exposed the full horror of the NRC exercise even at different international fora. In particular, international opinion was scandalized over the ruthless and summary dispatch to special prisons, often without benefit of appeal, targeting particularly the old, the poor and barely literate people in Assam. Such people usually find it hard to produce official certification about their education, service records, period of residence at different places, etc.

When the informal sector of the economy is much larger than the organised segment, which applies to most of India including Assam, securing service/residential records become a major problem especially for migrants looking for work. Former Vice Chancellor of Assam University and the son of a freedom fighter and MLA of the State Assembly Mr Tapodhir Bhattacharya, reported a case where even a 100 year plus old man, was hustled into jail because he could not satisfy stern-faced officials checking his papers about his citizenship. Often parents of children were listed as citizens but not their offspring and vice versa. There were thousands of such horrendous anomalies which were widely reported in the press. The apprehensions of the minorities about the actual working style of the FTs therefore, cannot be dismissed out of hand.

A Delhi-based HR group reported that many of the FTs themselves were not really functional. Often there was no official staff to run them for days in some districts. Many concerned officials were not aware of the laws relating to citizenship and other issues, nor had they been properly trained for their work. The targeted people especially if they were relatively poor and barely literate, received no legal aid of any sort, although such facilities had been promised on paper.

Scores of people who went unlisted complained of not being called to appear before any authority at all! In many cases negative judgments had been delivered ex parte in their absence. For such people, the only time the authorities contacted them was in the form of uniformed policemen who led them to the nearest of the six detention centres run with the most basic of facilities, for indefinite periods of incarceration.