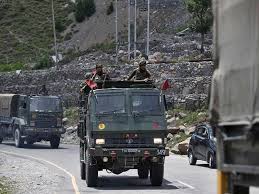 PM HAS TO MOVE WITH CAUTION AND LONG TERM STRATEGY
The recent escalation of tension between India and China started with two incidents in the border. On May 10, at Naku La in Sikkim, the Chinese troops crossed into what India considers to be indisputably Indian territory. No firearms were used. It was a hand-to-hand fighting which left many injured on both sides. About the same time, the Chinese objected to India’s construction of a strategically important border road in the Galwan Valley. Apparently, there was no cause of objection as the Indian side said the road was eight kilometers west of the border.

The Sino-Indian border has all along been a contentious issue. The Chinese are at many places we consider our territory and the Chinese consider to be theirs. The Indian version is that “There are differences of perception between the two sides about the exact location of the Line of Actual Control.” True. But it is also true that both sides have agreed not to do anything unilaterally that will change the status quo. The Chinese have all along shown scant respect to this agreement and frequently acted unilaterally.

What is regrettable is that whenever the Chinese violated the LAC and entered into our territory, the response of both the Indian Government — whether Congress or NDA – and the Indian army has been feeble, half-hearted and tongue-in-the-cheek. Each time the Chinese intruded into our land, there was a desperate attempt to tell the Indian people that there had been no Chinese incursion; the Chinese had not occupied any Indian territory; and that the whole thing was a result of “differences of perception” between the two sides about the location of the LAC. It was an apology for China. Implicitly, we accepted that the Chinese had the right to act unilaterally according to their “perception” of the LAC, but we did not have the same right. This timidity on India’s part only further emboldened the Chinese to take frequent liberties with the border at will.

The Chinese armed patrol parties became more aggressive in their behaviour. The mountain range running north of the Pangong Lake in Ladakh have several “jutting out” points which are called “Fingers”. There is no metalled road here. It is a kutcha, mountainous road. Our troops used to patrol regularly from Fingers One to Eight. Lately, the Chinese army started obstructing them and preventing them from going beyond Finger Four.

Matters came to a head on the night of June 15 in the Galwan Vallley in Eastern Ladakh. An Indian patrol party was set upon by the Chinese troops. Twenty Indian soldiers, including their commanding officer, a colonel, were beaten or bludgeoned to death. This was something difficult to stomach even by our tolerant government. The army was seething with anger and wanted to take some punitive action.

Simultaneously, satellite pictures showed the Chinese were building bunkers, amassing troops, pitching tents and deploying artillery on their side of the border. Their intention seemed anything but peaceful. Along with these preparations, China went on accusing India of occupying Chinese territory, though the boot was on the other leg. India had to respond. “War” is a dirty word and is seldom used in political diplomacy. The standard phrase is: “Prepared for all eventualities” We made it plain to the Chinese that this time we are not going to budge an inch, yield any new territory and dug our heels in. ” The chief of the IAF, Air Chief Marshal Bhadauria, paid an “unscheduled” visit to Leh, to see our preparations. The navy was also alerted. We were, indeed, “preparing for all eventualities”. Meanwhile, it also came to light that the Chinese had taken prisoner ten Indian soldier and held them in captivity for three days before releasing them. Our Government had initially suppressed this fact.

Such faux pas are made when power is wielded by those who have not learnt the ropes of statecraft, the art of governance and the subtleties of diplomacy. Though the PMO and senior leaders of the BJP hastily went into damage control, insisting that what the PM had said was being “mischievously interpreted”, the damage had already been done.

The future of India-China relations will depend entirely on China. China has to decide whether it wants to live in amity or enmity with a neighbour which has an area of 3.28 million kms, a population of a thousand and three hundred million people, a country endowed with rich natural resources and which has the resilience to absorb any blow like a pandemic. China should also bear it in mind that in another decade India will have acquired the military capability to defend itself against country, howsoever powerful, and beat back the enemy.

China should not fail to see that its belligerence and its muscle-flexing against India is bringing about a change in the balance of power in the world. The US, Britain, France, Japan and Australia have already come out in solidarity with India and the more aggressive and expansionist China becomes, the more it will antagonize other nations. China will have to think many times before even risking a local war in the border because a local war may spin of control and become a hot war. A ‘hot’ war with China at the moment seems quite unlikely. China knows that in a full-fledged war, if India feels its very existence is threatened, she can, on her own, inflict unacceptable damage on China. So, Beijing will continue to test our nerves, give us pinpricks, probe our defences and give us constant provocations, but stop short of starting an actual war that may invite consequences which China wants to avoid at all costs.