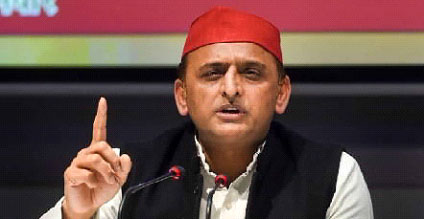 Much significance is being attached to the statement of Samajwadi Party national president and former chief minister Akhilesh Yadav that he would not contest assembly polls. Akhilesh Yadav, who is MP from Azamgarh, will now concentrate on campaigning for his party rather than looking after his own election for the assembly. There is a general perception in UP now that the Samajwadi Party is emerging as the
main opposition party giving a challenge to the ruling BJP. On the pattern of West Bengal, Akhilesh Yadav launched ‘khadera
hobe’ in UP assembly polls. While addressing a public meeting in Hardoi, Akhileshannounced that the ruling BJP and chief minister Yogi Adiyanath would be driven away from UP by voters in the assembly polls. While on the one hand Akhilesh Yadav is expanding the party base by making alliance with regional parties and on the other he is admitting important leaders from other political parties. SP has announced an alliance with Rashtriya Lok Dal of Jayant Chaudhary which commands hold inthe Jatcommunity of western UP. With RLD joining the farmers agitation, Jayant Choudhry is now addressing big rallies in the jatland of Uttar Pradesh. SP will gain from this alliance as Akhilesh has already announced support to the farmers agitation and sent senior leaders to address meetings. SP had contested the
2017 assembly polls and 2019 Lok Sabha polls with RLD. Akhilesh achieved success when his party entered into alliance with Suheldev Bhartiya Samaj Party of former minister Om Prakash Rajbhar. Akhilesh Yadav’s experiment in bringing dominant backward caste Yadav with most backward cast Rajbhar on one platform has been a success. This was reflected in the huge gathering at the joint public meetingofAkhilesh and OmPrakash Rajbhar at his home turf in Mau district.

SP is the only party where sitting MLAs, especially from BSP, and other important dalit leaders joined in recent months, which exposed an exodus from the party led by former chief minister Mayawati.

Akhilesh has given a clear indication that he would join hands with his estranged uncle ShivpalYadav, who recently announced his willingness for merger of his party withSP provided they were given adequate honour and respect.

Significantlyenough,AkhileshYadav announced the state executive of his
party, which made it clear that he was working for balanced representation of all castes and religions. He has deviated from the earlier positionwhen SP was known as a Yadav party. Akhilesh is aware that he was getting support from the majority of Muslims so he adopted a soft Hindutva stand to woo the upper castes, especially Brahmins.

Akhileshhas asked his party leaders and workers to participate inrevision of electoral rolls being conducted by the Election Commission. He has directed party leaders to ensure that nobody is left out from the voters lists. With Priyanka Gandhi making her presence felt through her style of functioning and bringing her party into focus of discussion and public debate, Akhilesh too launched an attack on national party. The Samajwadi Party national president said BJP and Congress followed the same pathand ideology and it was difficult to different between the two as both the parties helped financial defaulters to run away from the country.