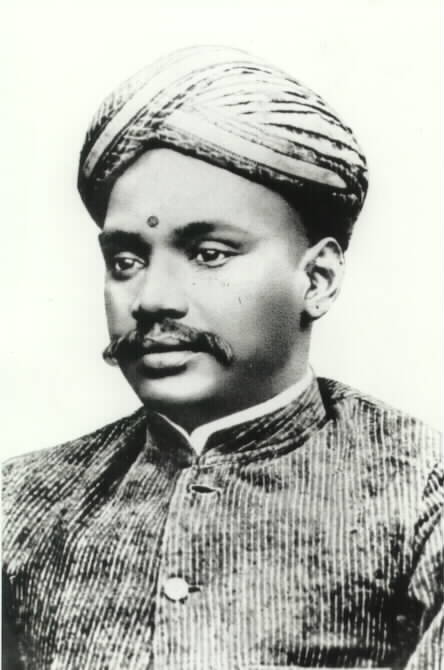 Even prior to Gandhiji’s Champaran Satyagraha, VOC led a movement by working class in Tamil Nadu and thus he is a forerunner to Gandhiji in this respect.

The role played by Vallinayagam Olaganathan Chidambaram Pillai, [VOC] popularly known asKappalottiya Tamilan [The Tamil Helmsman] and Sekkizuththa Semmal  [scholarly gentry who suffered at the oil press], was an exceptionally talented organiser and an individual who believed in utilising all available avenues to rouse the people for nationalistic cause. It was not until the arrival of V.O. Chidambaram Pillai (VOC) at Tuticorin (Present day Thoothukudi) that the Swadeshi movement in Tirunelveli district began to gather force and momentum.

V.O. Chidambaram Pillai [V.O.C.] was born on 05 September 1872 to an eminent lawyer Olaganathan Pillai and Paramyee Ammai in Ottapidaram, Tirunelveli district of Tamil Nadu. VOC was graduated from Caldwell College, Tuticorin. Before beginning his law studies, he worked for a brief period as the taluk office clerk. His tussle with the judge forced him to seek fresh pastures at Tuticorin in 1900.Until 1905, professional and journalistic activities consumed most of his energy.

VOC entered politics in 1905 following the partition of Bengal. Towards the end of 1905, VOC visited Madras and was drawn closer to the Swadeshi Movement initiated by Bal Gangadhar Tilak and Lala Lajpat Rai. VOC was drawn towards Ramakrishna Mission and came into contact with Subramania Bharati and the Mandayam family.

Historically, Tuticorin has been one of the most important ports in Tamil Nadu, second perhaps only to Madras in the modern period. While the merchants of Tuticorin engaged in active trade with Ceylon, passenger shipping as well as cargo services were monopolised by European shipping companies such as the British Indian Steam Navigation Company Ltd. (BISNCo), the only company maintaining a regular steamer service between Tuticorin and Colombo. BISNCo officials treated their Indian patrons in an unfair and offensive manner.

By 1906, VOC won the support of merchants and industrialists in Turicorin and Tirunelveli for the idea of establishing a Swadeshi merchant shipping outfit by the name of the Swadeshi Steam Navigation Company (SSNCo). In the process, he converted Tirunelveli district into a hotbed of intense nationalist politics—to the dismay and anger of the British authorities. The formal birth of the Swadeshi Steam Navigation Company (SSNCo), on October 16, 1906, was largely the personal achievement of VOC. Meanwhile, VOC brought together leading commercial figures from Tirunelveli, Madurai and other centres in Tamil Nadu in order to place the Swadeshi shipping company on a firmer footing.

The SSNCo soon acquired considerable patronage obliging the British Company to take retaliatory steps. For VOC and other swadeshi leaders, however, the only way to keep SSNCo afloat and to combat BISNCo’s infinitely greater resources and imperial backing was to win the support of the people. VOC won the active support of another fiery Tamil orator, Subramania Siva. VOC and Siva were aided in their efforts by a number of Tirunelveli-based lawyers, who formed an organisation called the Swadeshi Sangam, or ‘National Volunteers’.

The nationalist movement acquired subaltern character with the beginning of the Tuticorin Coral Mills strike. It provides important insights into the class character of the nationalist movement in Tamil Nadu. Working conditions in these mills were extremely poor. In 1908, a total of 1695 workers, 59 per cent of them aged 14—16, worked at Coral Mills owned by the British. Their day started early, at about 5 a.m., and they laboured until seven in the evening. On 27 Februrary, 1908, the Coral Mills work force decided to go on strike; their demands included a reduction in the number of working hours and a pay increase. The workers’ cause was taken up by V.O. Chidambaram Pillai, who had long been interested in labour welfare, and the striking workers quickly gained the sympathy and support of the people of Tuticorin. Even prior to Gandhiji’s Champaran Satyagraha, VOC took up the cause of the working class in Tamil Nadu, and thus he is a forerunner to Gandhiji in this respect.

In the first week of March 1908, a series of stirring speeches by VOC, Siva and Padmanabha Iyengar electrified the people of Tuticorin. The nationalist leaders, with strong support from the people of Tuticorin, resolved to take out a mammoth procession on the morning of 9thMarch 1908 to celebrate the release of B.C. Pal from jail and to hoist the flag of Swaraj. Collector Wynch cautioned the Madras Government that the Swadeshis had gained too much prominence and propose to have another meeting on Monday which must be stopped’.On 12 March, VOC, Siva and Padmanabha Iyengar were remanded to the district jail. Infuriated by the detention of their leaders through overt manipulation of the law, the people of Tirunelveli exploded and the district became engulfed in riots.

VOC, who was soon transferred from Palayamkottai Jail to Coimbatore Central Prison, suffered much at the hands of his jailors, in particular a warder nicknamed ‘konaiyan’ (‘the curved one’). Konaiyan first assigned VOC to a jute-cleaning machine which had to be operated with one’s bare hands; the skin of both palms soon peeled off and VOC’s hands started bleeding. When he brought this fact to the attention of the jailor, the latter ‘was kind enough to substitute V.O. Chidambaram for an ox to operate on the oil press in the hot sun’. The eminent lawyer and nationalist leader now found himself forced ‘to draw an oil press like a brute, with fetters on his hands and legs’. However, Madras High Court reduced his sentence and he was finally released on December 24th, 1912.

Poverty did not deter VOC from pursuing nationalist cause; his love for the country outweighed his own penury. The correspondence between Gandhiji and VOC during the years 1915-16’ stand testimony to the unflinching patriotism exhibited by VOC.

V.O.C. spent his last years (1930s) in Kovilpatti heavily in debt, even selling all of his law books for daily survival. V.O.C died on the 18 November 1936 in the Indian National Congress Office at Tuticorin as was his last wish.

V.O.C. was also an erudite scholar. The autobiography in Tamil verse which he started in prison was completed upon his release in 1912. He also wrote a commentary on the Thirukural and compiled ancient works of Tamil grammar, Tholkappiam. He showed ingenuity in his works ofMeyyaram and Meyyarivu, praised for spontaneous style, and earned an indisputable reputation for translations of James Allen’s books. He authored a few novels, as well.

VOC’s sustained struggle against the colonial British nullifies the sweeping generalizations made by some British historians that Tamil Nadu was “benighted” i.e. politically inactive during national movement. The images of struggle and national assertiveness left behind by VOC and his talented lieutenants would continue to inspire the generations to come.

* The author Prof. N.Rajendran is Director,  Bharathidasan School of Management and  former Professor & Head of the Department of History, Bharathidasan University, Tiruchirappalli. (TN)