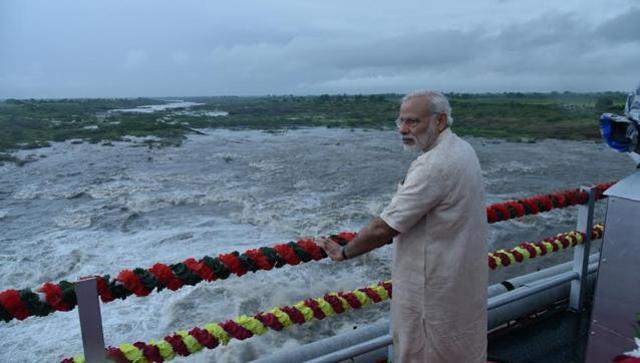 Mercurial Narendra Modi mitigates water-dry in Saurashtra via SAUNI (Saurashtra Narmada Avtaran Irrigation), an ambitious plan to fill 115 reservoirs in water-scarce Saurashtra with waters of overflowing Narmada thereby evincing “its no meretricious feat; its not metabolism; its no melodramatic feat but sheer utilization, usage, exploitation of one’s willingness to reach all round benefits to the masses so that they are not deprived in any way.

(Saurashtra  is a region of western India, located on the Arabian Sea coast of Gujarat State. It consists of 11 districts of Gujarat : Rajkot, Jamnagar, Junagadh, Bhavnagar, Porbandar, Amreli, Surendranagar, Devbhoomi Dwarka, Morbi, Gir Somnath and some portions of Ahmedabad and Botad Districts also fall under this area.)

Saurashtra went through severe droughts over the years to the extent that people could no longer grow crops, nor did they have drinking water available. Chief Ministers of Gujarat strictly speaking ignored it for reasons best known only to them though many of them are non-existent today.

It is Narendra Modi as Chief Minister of Gujarat  implemented (then impossible-sounding) ambitious plan of filling surplus water of Narmada to 115 dams of Saurashtra region in Gujarat.The ambitious Rs 10,000 crore scheme was named as ‘Saurashtra Narmada Avataran Irrigation Yojna’ (Sauni yojna). Modi then pronounced to supply one million acre ft water to Saurashtra region. Government officials and consultants worked for one and half year on this project. This scheme was very special because it would continue to add value to lives of the people of Saurashtra for next 100 years.In the next five years, he declared that he would not only focus on SAUNI project, but would also kick start the Kalpasar project. Modi announced his plan to hold conventions of farmers at 115 dam sites to honor goddess Narmada and added that each convention would be attended by minimum 10,000 farmers. Later Gujarat government allotted  Rs 1,000 crore for SAUNI yojana for one year. As of today, Narmada water will be fill through gravity in 115 dams of seven districts by 1,115 km long link canals of all the four zones. The four links include, Link-1: Matchu-2 to Sani; East Saurashtra, Link-2: Kalubhar to Raydi, Link-3: Dholidhaja-Venu; central Saurashtra, Link-4: Bhogavo to Hiran-2, south Saurashtra. The dams which will see replenishment include 30 dams in Rajkot, 28 dams in Jamnagar, 13 dams in Junagadh, 09 dams in Amreli, 05 dams in Surendranagar and 04 dams in Porbandar district.

BOTTOM LINE / CONCLUSION : Lesson for all Administrative Bosses all throughout the country : When there is a definite, timebound, fixed, destined, targeted aim, there surely is a positive, conclusive conclusion.