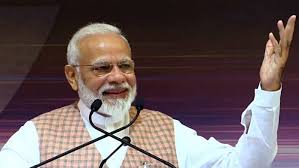 CONGRESS HAS TO WORK HARD TO BUILD A VIABLE AGENDA
Prime Minister Narendra Modi will be completing his first year in office in his second term on May 30. While critics are discussing Modi government’s hits and misses in the past one- year, what has the opposition done? What is its report card? Has it played its watchdog role? The answer is in the negative. The role of the opposition is very important in a democracy and an effective opposition is its base. To its credit some non- BJP parties had formed the government in Odisha, Andhra Pradesh, Telangana, Maharashtra, Delhi, Rajasthan, Chhattisgarh, Jharkhand and till recently Madhya Pradesh in the past one -year.

Why is even the main opposition Congress Party ineffective? This is because the Congress itself is going through a leadership crisis and it is still groping for an effective narrative like it came up with the catchy “Aam Admi’ slogan in 2004 before it captured power. The lack of an agenda is also one of the reasons. The Congress is in the process of re-discovering its identity and relevance currently.

There are various reasons for the present state of weak opposition. The first is that people have given a big mandate to Narendra Modi in 2019, even bigger than 2014 when he came to power ending a 30- year coalition rule while the opposition was not favoured. But that should not be an excuse because the same opposition managed to bring down the Rajiv Gandhi’s government in 1989 on the Bofor’s gun deal. In fact Rajiv Gandhi got a much more massive mandate- a whopping 415 seats out of 542 in 1984 while Modi’s BJP got only 303 in 2019. Despite the small number in Parliament, there were many opposition stalwarts in Parliament like Inderjit Gupta, Somnath Chatterji, Vajpayee, Advani, Unnikrishnan and a few others who were able to hold the Parliament to ransom on Bofors scam and brought down his government. So the number game doesn’t apply to the present crisis in the opposition.

Secondly, and more importantly, the opposition needs an effective narrative to hit at the Modi government. The issues and opportunities were many but the narrative was weak. For instance in the past one -year, many controversial laws like the Citizenship amendment act and the repeal of Article 370 etc. had been pushed through despite the opposition protests inside Parliament and outside. But the outbreak of the Coronavirus pushed all other important issues including the slide in the economy to the background and for the past six months nothing other the Pandemic became the gripping issue for the nation. Unfortunately, without the Parliament forum, the opposition lost an opportunity to effectively speak for the miserable plight of the stranded migrant labour though each party had raised the issue individually.

Thirdly, the most important factor is the lack of unity among the various opposition parties. They failed to unite even on important issues like the CAA though some parties took to streets. Modi was able to use this division successfully to get the controversial laws passed even in the House of Elders where the government is still in the minority. The opposition is not able to sustain unity efforts. Nearly 22 opposition parties – small and big- attended the virtual meeting called by Sonia Gandhi last week. This is not the first time in many months, such efforts were made as there were many such meetings in the past but they are not sustained. The opposition is waiting for a miracle to unite.

Fourthly, the opposition is leaderless as the Congress being the big national party, has not been able to take lead. They are not able to agree on one leader with stature to lead the opposition. . Leaders like Deve Gowda, Mulayam Singh and Lalu Prasad Yadav have taken a back seat now. Moreover, while many senior opposition leaders are amenable to attend meetings called by Sonia Gandhi, they were reluctant to accept Rahul Gandhi’s leadership

Fifthly, the new generation of opposition leaders have no connect with the people. Some of them have come up because of the family influence and others have made lateral entry. The family fiefdom concept is working only at the regional level and not at the national level.

Sixthly, they were not a single leader who can match the oratorical and persuasive skills of Prime Minister Modi who is able to keep 1.3 million people inside their homes during the past eight weeks of complete lock down. There are many who are critical of the handling of the Covid-19 crisis but the opposition has failed to make use of this opportunity. There are many other issues, which are of public interest that could be projected. In short, the opposition needs a strategy.

Modi continues to be popular because he has no opponent. The bottom line is that while the BJP has chalked out its agenda the opposition is still blinking in darkness.