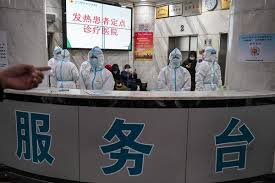 CHINA HAS GOT THE CHANCE OF REDEEMING ITSELF THROUGH PROMPT ACTIONS
China and the coronavirus is all about markets. If in Wuhan, it was a ‘wet market’ where the virus got a foothold before taking off to climes across the world, the coronavirus has returned to roost in another market, this time in capital Beijing – the Xinfadi wholesale vegetable market – prompting Chinese in prominent posts to say, “It’s time to remind the Chinese people that the virus has not gone away!”

At the same time the Chinese are also telling themselves that they are in the spot against the virus and should prepare “for the long haul”, in a “battle” that they have to win. The problem is the ultimate victor in this fight between virus and virus-maker (whoever that unworthy may be) will be the maker of a anti-Covid-19 vaccine. For some reason, the Chinese do not seem to fit the bill of a vaccine-maker.

China is known to be good at appropriating original ideas and patented processes of others. And, that is not a disparaging comment; for it takes a particular talent to acquire and adapt, a gift which the Chinese have in plenty. For the time being though, it’s the “cluster in Beijing’s Xinfadi” that has the Chinese leadership in a tizzy, and a huddle. For “long”, the state-controlled Chinese media have been writing and talking about China’s Wuhan victory and the new outbreak in Xinfadi has thrown water over Chinese claims.

At the same time, the world’s again asking how’s it that when the virus could travel to Slovenia and to New York to Seattle and Toronto to Moscow – Dubai to the banks of the Danube – why’s it that the virus couldn’t make it to Shanghai and even places close to Wuhan? The Chinese are not talking and the state-run Global Times, otherwise voluble, is also playing possum – the inscrutable Chinese!

That being said, experts in China are wondering and questioning how could the coronavirus get into Beijing despite the “strictest of prevention and control measures.” For lesser folks this side of the Himalayas, for whom the Great Wall of China is a picture postcard, this shattering of the Chinese superiority myth is elixir that restores self-esteem! And that at a time when the PLA has got India by the fingers and leading her into the icy depths of Pangong Tso Lake.

The Chinese are acknowledged secretive people. It could well be possible that the Xinfadi infiltration has put the brakes on the PLA’s onward march. More so when it’s finally settled into the Chinese psyche that “Beijing has been hit” and “we (China) must accept the reality that the coronavirus is hard to prevent.”

Also, it’s become quite clear to the Chinese, steeped in wisdom, that humankind’s knowledge of the coronavirus is limited. For all the lab work done and going, man actually doesn’t know much about the coronavirus, and as to how COVID-19 patients should be treated, with what. To this, China wants to add the two “unknowns” – “where the virus sprang from, and how it spreads?”

China has all along been claiming that the coronavirus did not originate in Wuhan and that POTUS Donald Trump – who gave the Chinese reason to detest him by calling the coronavirus “the Chinese virus” – should get his cranium examined. POTUS, of course, is now so caught up in playing “Statue” with the Democrats that he has no time to spare for China though it’s a cinch that Beijing’s “Xinfadi” will not fail to hold his attention. It could be the straw he’s looking to cling to.

However, beyond the song and dance and going away from the Trump-China “hot war”, it’s fact that the “Beijing Xinfadi” coronavirus outbreak is a wake-up call for the world at large – it is news that contrary to claims, China failed to “eradicate” the coronavirus from within its boundaries and that no country could possibly get completely rid of the virus. The Chinse are now saying that the “epidemic” can break out from “unexpected directions”, and that what happened at the Xinfadi is a sign that the war with Covid-19 is far from over. as many as 46,000 people in Xinfadi’s surroundings are being tested!

From news reports and editorials in Chinese media, it’s apparent that the Chinese leadership – the Chinese Communist Party – wants to assure public opinion that the virus is under control and though its spread is a matter of concern, the virus’s impact on the lives of people will be curtailed and China’s “economic recovery” will not be disrupted. But that is not going to assure world opinion which, sorry to say, has to a large extent lost faith in China.