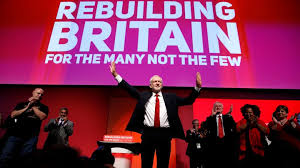 CORBYNITES NEED DEEP INTROSPECTION FOR A TURN-AROUND
Electoral compulsions and the impulse to keep the rightist forces in good humour have witnessed fundamental transformation of the UK’s Labour Party. The party has decided to divorce the left ideas and policy notwithstanding the ground realities favouring Labour Party embracing the socialist ideas for espousing the cause of the poor people who have significant number in the country.

This has been happening in a situation when a completely new idea has been making round in the social and political circle of Britain that Marxism is more relevant today for addressing humanity’s urgent challenges despite the desperate efforts by the capitalist class to bury it. In the modern times there is no Stalin or Lenin to fight for Marxism, but a closer look would make it explicit that the ideology has grown and spread..

The world today is a far different place than it was in Marx’s time. Only socialism can ultimately restore a harmonious relationship between society and nature and between humans and their labour.

Before Labour Party lost the parliamentary election under the leadership of Jeremy Corbyn socialism was at the core of its policy and ideology. Membership grew from 150,000 in 2014 to almost 600,000 in 2020 and these new members are largely progressive and committed.

But with Keir Starmer taking over the leadership of the party basic political and ideological changes are underway. Jon Lansman, the founder of Momentum, the grassroots organisation set up in 2015 to support the left wing of the Labour party under Corbyn, has announced he will step down as chair of the group. While stepping down he said it was time for a new generation of leaders to campaign for socialist policies and to put their ideas into practice, as he revealed he would not stand in internal Momentum elections in June.

The veteran political activist called for better governance within Labour, and demanded “justice for sabotage” and for the alleged misuse of funds, as well as for “racist, sexist, ableist and frankly McCarthyite attitudes” that he claimed the leaked report into the party documented.

“We are now a mass of dedicated activists fighting for a better world,” he wrote, “But we must also make sure that the party’s machinery never again returns to those days of anti-democratic stitch-ups, factional warfare, and toxic culture.” He wrote that upon Corbyn becoming leader, socialists were few in the Labour party, but “today we are many” and there was “real cause amongst us for hope and confidence”.

Lansman added: “In 2017, with an incredibly popular socialist manifesto, we achieved the biggest swing to Labour since 1945. Promising to restore public ownership and end austerity, we came within just 2,500 votes across a handful of constituencies from forming a government.”

He credited the movement around Corbyn, bolstered by Momentum’s grassroots campaigning and viral videos, for forcing Labour to “never again be the party of illegal invasions, anti-immigration mugs or support for Tory policies of austerity and privatisation”.

Lansman has done an incredible amount to transform the politics of this country. He has played a key role in building Labour into a half-a-million-member party and strengthening the movement for socialism in Britain.

The Labour Party is not a political workers’ party with Marxist orientation and outlook but a thoroughly bourgeois party. The only difference is it has some committed Marxists as its leaders. The fact that it is a party of bourgeoise is manifest in most of the leader opposed Jermy Corbyn as he was a supporter of Marxism.

From the beginning there have always been some who, starting their political life on the left, became prominent as severe critics of the Labour Party and Labour Governments. They moved steadily to the right as they climbed from the lower rungs to the higher positions in the hierarchy. Successive British governments, Labour and Tory, have sought support from the Americans for the defence of Britain’s own imperialist positions.

In the backdrop of Lansman development fresh move is being made to find out the reasons for the defeat of the party in the elections. A section of the leaders and cadres nevertheless are seen asking question; Why pick over the bones of the election? The reason is while the favourites of the new leadership desire complete purging of the pro-Corbyn elements, the supporters of Corbyn does not want to their grip over National Executive Committee, which oversees the party – and which is currently majority-Corbynite.

In fact ever since Corbyn lost the leadership to Keir Starmer, the question about survival of Momentum was haunting his supporters. With a new Labour leader in place, the 40,000-strong organisation must decide what its future will be – if it is to survive at all.

The Momentum is also undergoing introspection is clearly evident from the fact that a major section of the members are willing to review the role of the organisation in the present context. Significantly recently Starmer said the party should unite, and called upon not to be harsh tor the last Labour government nor “the last four years” under Corbyn. He also pledged to back a leftwing economic agenda with the aim of reducing inequality and increasing social justice.

Nevertheless the appointment of David Evans’ appointment as the general secretary earlier this week by the party’s ruling National Executive Committee is seen as a boost for Keir. This implies that Evans’ has a big job ahead of him. This also sends the strong message that Starmer can win key votes on party control. It was his “entrepreneurial instincts and experience of electoral politics” which attracted the attention of Sir Keir’s team, the insider said.

A close aide of Starmer observed; “We need someone who is voter-centred and not internally or factionally focused. His tone is reassuring, his style is instinctively collaborative and we need to model that way of working at the top, so it permeates throughout the party.” But at the same time a number of trade unions on the left of the party are not happy at the development as in a 1999 report authored by him, he has described local parties as “dysfunctional”, and his co-authorship of an examination of the party’s 2015 loss which called for Labour to be more “small conservative”.