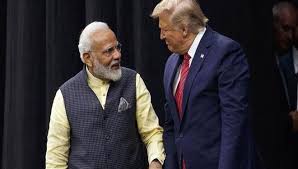 The People’s revolt engulfing the length and breadth of America should be an eye opener to the oppressive regime the world over. It tells the world about the deepening crisis of Trumpism, which has become the synonym of aggressive capitalism followed by many countries including India. President Donald Trump and his henchmen attempt to depict it as a simple law and order issue. It is a social and political upheaval with serious economic connotations. That exactly being the reason, why they want to call it a law and order problem. The brutal killing of George Floyd shows the ugliest face of racial hatred in recent times.

That hatred has its roots in the socio-economic contradictions in American society. The politics of hatred wants to address it with military deployment and waves of oppression. The mood of the revolting masses is not to succumb, but to fight. Solidarity actions have sprung up in all the continents. World leaders like UN secretary general António Guterres, Pope Francis and Canadian Prime Minister Justin Trudeau came out openly in support of human rights.

The video of George Floyd, the African American being killed by the American policemen was virally spread. It ignited the flames of anger that brought larger parts of America into a war like situation. The police, the military, the propaganda mills – all were let loose to quell the people’s anger. Such typical strategies of Trumpism was looked by the people across the world with great indignation. No repressive measure can reign in such massive agitations rising out of wide spread discontentment among people. The system itself is being questioned. The killing of George Floyd was only triggering the wrath of American society which was ever on the increase under Trump administration, which has registered its failure on all major accounts including the outbreak of COVID 19.

The world’s biggest military power stood shivering before the minute virus. It could not provide even masks for its citizens in the face of rising death toll. The economy is in pathetically bad shape. The latest ILO report says that America would be the worst hit country in the Post COVID days as the entire world is reeling under crisis with global joblessness estimated to be 305 million. Unemployment in the citadel of neoliberal growth has reached 23.9 percent and 17 percent of population have been rendered homeless.
In this background the mounting anger of people resulted in the outburst after the murder of the black American. It would be a mistake to understand the revolt as a backlash of black protest. People including whites and colored – all have joined the streams of the protest that flooded the American cities. AFL-CIO, the most representative trade union of the country is actively involved in the mass actions. US ruling class controlled by the corporate capital has come out to divert the focus to white extremists and racial clashes to diffuse the people’s movement. But the impact of the struggle cannot be easily rerouted.

The ideological brethren of Donald Trump in various parts of the world must be watching the developments in the land of Trump. In Prime Minister Narendra Modi, Trump has found his thickest friend in the world arena. And that Indian friend is always keen to subscribe to the philosophy, views, strategies and the economic measures pursued by the American big brother. Hence the global capitalist crisis which was further worsened by the pandemic has its undeniable presence in India too. The Modi style of fighting COVID 19 is the Indian version of Trump fighting Corona. Both believe in propaganda rather than providing protection for the people during days of pandemic. The tragic scenes of Indian migrant labourers has caught the attention of the world which can be compared with the plight of American blacks. Death toll in India has reached to more than 6000. Unemployment rate in India has touched to 23.52 percent in May according to the data released by CMIE on June 1, 2020.

The stimulus package proclaimed by the Modi government has nothing but hollow promises. Instead of the much talked 20 lakhs crores the actual figures are hard to reach even 2 lakhs crores. In the name of helping the poor all the ultra-racist governments in USA, India, Brazil or Turkey are behaving as the lapdogs of the big capital. And to facilitate this suicidal track of development they attack the workers and their rights in a ruthless manner. In America they ransacked the headquarters of American Federation of Labour, in India they are snatching away the hard-earned rights of the workers even without a parliamentary debate.

Trump-Modi politics has proven their expertise in engineering the politics of hatred using communal and racial tools. Parallels could be seen in the happenings of America and the attacks on Minorities, Dalits and Adivasis in India. In a way they reveal the feelings of insecurity shared alike by the ruling classes. In America, in a most hypocritic way Trump came to the scene with a Bible. In India mythology and Gods are roped in to cover up all inhuman and unethical deeds of the rulers. This is the crisis of 21st century capitalism. Trump and Modi are trying to save a system which has been destined by the history to fail.